Peter Nawa is a Startup Coach at BongoHive and works with entrepreneurs across a broad range of sectors, but is a trained accountant, a book editor and runs a publishing house called Write Lake. His time at BongoHive has been filled with many positive experiences. Peter is also a former TEDxLusaka speaker, having stood on the red circle in 2013 to deliver his TEDx Talk.

In 2016, he found himself with free time on his hands and decided to use this time as a volunteer for the TEDxLusaka event. For this event, TEDxLusaka had partnered with the African Development Bank to hold the event alongside the conference being held in Lusaka, so TEDxLusaka needed all the help they could get to pull off a successful event. Peter was glad to be part of the team. Using his experience as an accountant, Peter’s work for TEDxLusaka involves managing the finances and regulatory issues.

Peter describes TEDxLusaka as a one-of-a-kind event in Zambia. “It is about ideas that people have to share. We also offer a platform for people with great ideas. It shows that as a country we have critical thinkers and people who see possibilities,” he said.

After his first year volunteering for TEDXLusaka, Peter’s greatest lesson was that teamwork makes the dream work.

“Organising the event cannot be done by one person. It is a collective effort and people utilise their expertise and strengths. We do not get paid, we do it because we are passionate about what TED stands for. It is not always easy but a great challenge,” he said.

Peter’s 2013 talk described his opportunity to travel solo after months of preparation, and how important this undertaking was. Now, Peter helps other innovators share their ideas with the Lusaka community and beyond.

This year, BongoHive celebrates its 10th anniversary and Peter says his experience at the  innovation hub is, in a strange way, almost like TEDxLusaka. He gets to hear many different ideas, though they are mostly of a business nature. “One of the few things that brings me joy is seeing entrepreneurs who have gone through our programmes succeeding and flourishing.”Much like the many ideas worth spreading that have come from the TEDxLusaka stage. 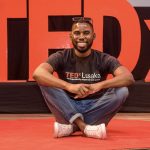 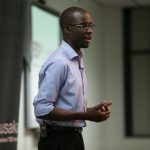